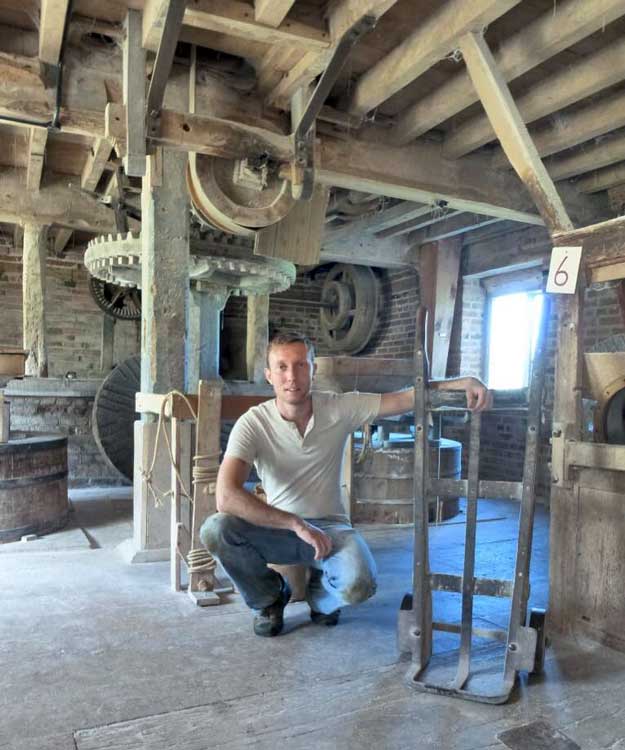 I’m going to tell you a little bit about how I came to be a Miller.

Before taking over Charlecote Mill, I worked within building conservation around Oxfordshire and Buckingham. I originally trained as a Carpenter but also worked using lime mortars. My interest in mills was sparked when I worked on Brill Windmill, not far from Bicester – it’s a small post mill and I was fascinated by it.

Following that I was lucky enough to be asked to apply for the William Morris Craft Fellowship, which is run by the SPAB (Society for the Protection of Ancient Buildings) and I was selected to become a Fellow in 2009. The Fellowship is a unique course allowing crafts people, who work within building conservation to further their understanding and knowledge, try different skills and work with experts within their field. It’s spread over a year in two month blocks and gives you the opportunity to travel within the UK and work with crafts-people and experts within their field.

On my Fellowship I decided to concentrate on milling and millwrighting.

On my Fellowship I decided to concentrate on milling and millwrighting and spent some time with mills and millwrights around the UK. it’s then that I joined John Bedington for a week at Charlecote Mill. I was struck by how original and unspoilt the mill was and how traditionally it was run. There are only a handful of traditional mills left running commercially in the UK and I was amazed to see this one surviving so well. I went away from my time there contemplating what it would be like to be a Miller.

A year later (2010) I decided to become a trustee for the Fellowship and help support the course that had opened my eyes and introduced me to my future. I stayed in touch with John and went to help him at times on repairs and maintenance and when he said he was looking to retire, it didn’t take me long to jump at the chance. What an amazing opportunity to use my traditional skills, looking after one building. I also gain my own business and become part of the mill’s history – it was too good not to try!

It was about 2 years in the making from the initial decision to then becoming Miller.

In July 2012 I resigned from my job and went to shadow John for 3-4 months to learn from him and have a crash course in milling. I didn’t know if I was going to get to grips with milling, or running a business for that matter, but I officially took over the mill in October 2012 and I haven’t looked back since. I’m very lucky to be the custodian of Charlecote Mill, I love my job and spending my time looking after this amazing piece of working history. I thank John for his continued support and knowledge and I’m so lucky to have such supportive family and friends.

In 1975 my brother and I took a holiday in Cornwall.

Not for a week on the beach at Newquay like most of the other men of our age, instead we elected to look at and photograph the legacy of the Cornish Tin Mining era.

We were into the hip cliché Industrial Archaeology

My brother had done the background planning, he had read a lot about Cornish mining, and was able to recognise most of the iconic engine houses in and around Camborne and Redruth. I was the up and coming budget photographer. To develop and print a roll of 36 exposure colour film in those days cost around £5.50; a week’s wages for me as a construction apprentice was £17.00. 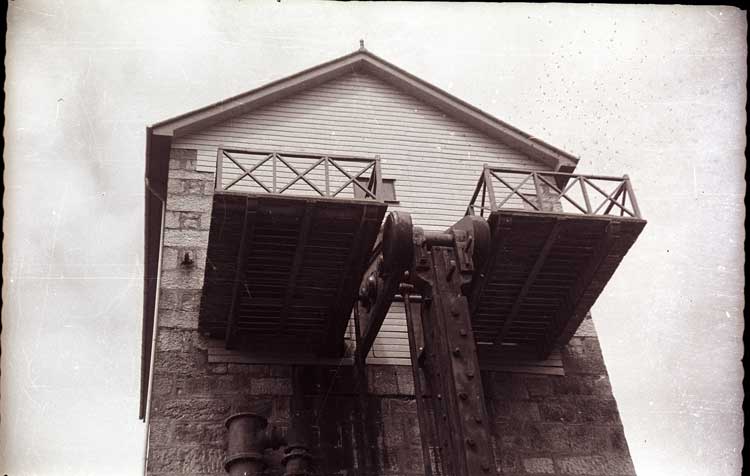 We had a tent and a sleeping bag each, no camp bed or mat, and we spent an incredible week living on fish and chips. I was shooting in black and white, Ilford FP4, and would develop the films when home in our mum’s bathroom. She loved us to death – honestly!

Before we even set-up camp, we came across East Pool and Agar Mine at Taylors shaft. In those days you bought a ticket at East Pool Whim that gave entrance to the Cornish Engine house at Taylor’s shaft.

It was there we met John Bolt, a retired Cornish miner – a shaftsman. John was working as a volunteer for the National Trust, and would open the engine house on a daily basis. John seemed at first a little bit tired of the visitors. Static Cornish Beam engines and retired Cornish miners don’t say a lot to the casual visitor, they invite you to bring something to the party first – it’s a test!

However we did bring something to the party, our thirst for knowledge, the need to know about an industry that shaped the face of the country, we passed the test and the stories started and did not stop for a week!

John had worked in the Cornish Tin Mines all his life, when he retired he ran a chicken farm nearby, but John’s identity was that of a Cornish tin miner. Over the week in Cornwall, we would pop in and see John every day, where he would tell us remarkable stories of his life underground, right up until the mine eventually changed over to electric pumps in 1954. 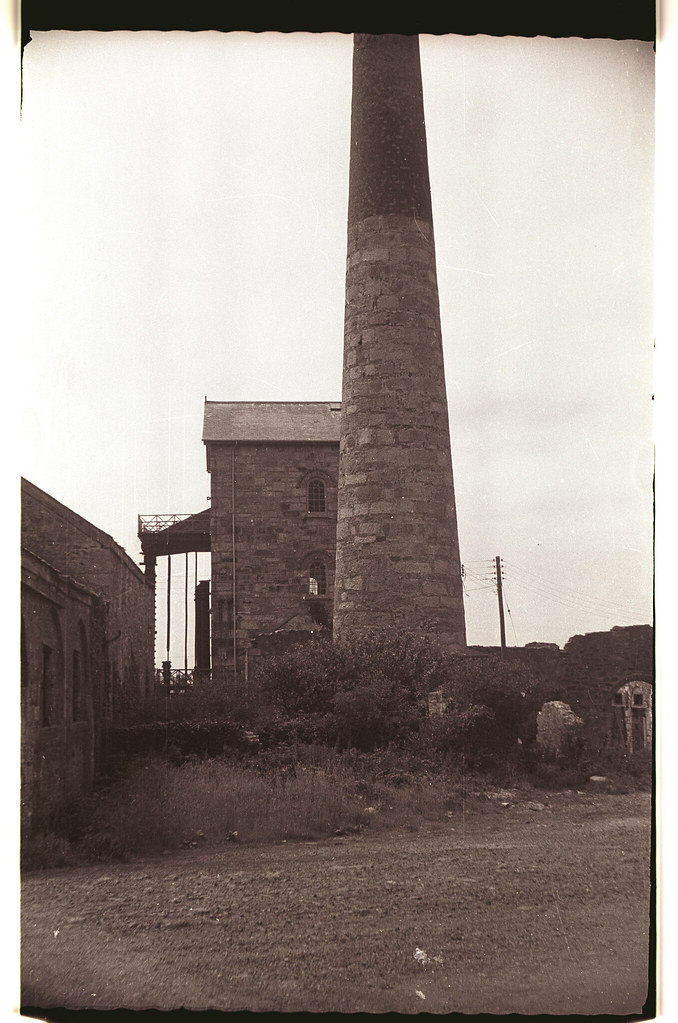 John was a shaftsman who maintained the Taylor’s pumping shaft at East Pool Mine – all 1,700 feet to the sump at the bottom. He told us that on occasions, he had also driven the 90” Cornish beam engine, and could have been one of the last people to see it working. The normal Cornish beam engine driver was a young chap who can been seen at work on a BP archive film, John knew him well.

John told us all about the layout of the pump rods, plunger and lift pumps, clack valves and the 5 other underground balance beams. It would take him an hour or so to climb up the ladders to the surface. The Cornish engine has a beam weighing around 52 tons, yet when the command to ‘blow poles’ was given, the driver “could move that beam a quarter of an inch” John would tell us.

John told me the story of a miner who had become trapped by his hand, and after couple of days still could not be freed. A doctor was bought down the mine, to anaesthetise the guy. As John held him steady the doctor cut his hand off; John said “in about three seconds”. John said the guy was back at work a week or so later, and happened to come across his own hand after some blasting. The guy just casually picked up the hand, looked at it and said “look, a perfectly good hand, nowt wrong with it”. The guy put the hand in his pocket and took it home with him! 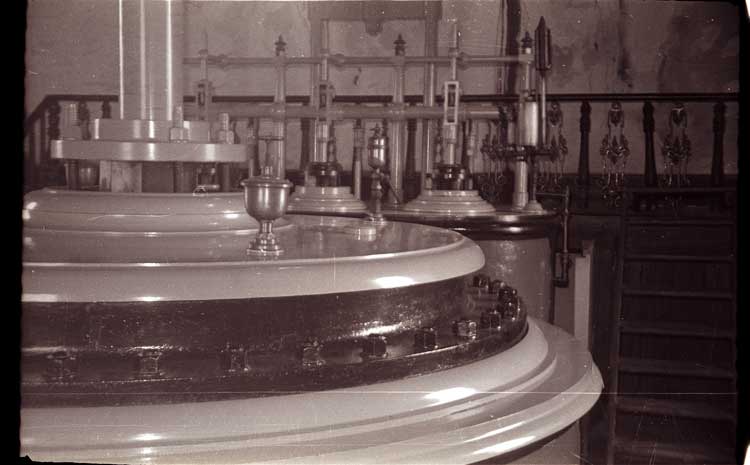 I made a further visit to East Pool and Agar mine the following year, and again was entertained by John Bolt. He was a guy I thought would be around forever, so in 1977 I did another trip to Cornwall, only to find John’s green Reliant car was not outside the engine house.

I enquired inside to a well-spoken BBC accented middle aged gentleman, who casualty informed me John had died in his sleep over the Christmas holiday. As you can imagine, I was gutted. My feeling arose not only from the news of John’s death, but because this loss was presented to me by this other person, as just the passing of another doddery old man. He clearly stereotyped John as someone well past their sell by date who had passed away, and had made way for a new up and coming intellectual who was really going to give the visitor experience a proper job well done.

He was not in the same race. He did not have the capacity to see that the world had lost a giant of a man whose depth of practical hands on knowledge reached back several generations and brought the past alive.

John’s name, along with a few others, is etched into the glass window on the first floor of the engine house – the one overlooking the entrance door. John’s name is right in the place he loved to be, in a Cornish tin mine engine house entertaining the visitors with his remarkable stories…. Well only the ones who were able to pass his special test!

I wish I had made a tape recording of John’s stories, but the retroscope has yet to be invented, so now, I am the keeper of John’s memories, and need to tell the stories myself…. I must devise a test! 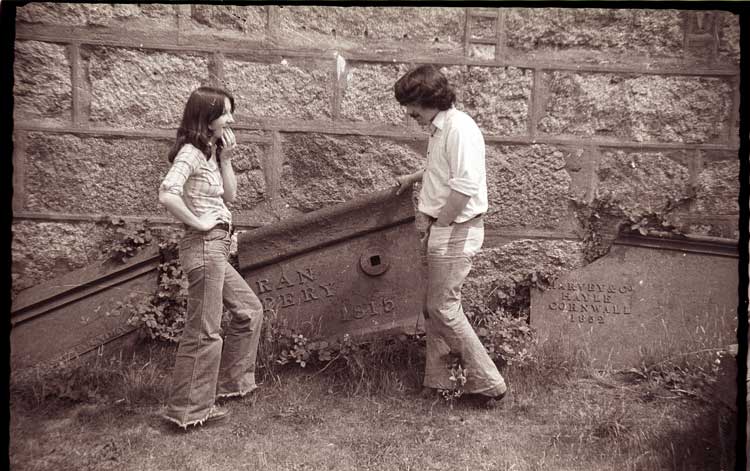 Written by David Moore. Posted on February 17, 2016 by morturn on his blog site!
All images are copyright of David Moore.
David Moore is the Chairman of the Lichfield Waterworks Trust. Dave Moore’s association with history began inauspiciously. He was thrown off the History CSE course at secondary school for failing to show an interest and failing to hand in any course work. His working career started with an apprenticeship in the construction industry with an upward path leading to management in the private sector. Despite his worst efforts at school, Dave has always maintained his interest in history. He travels Britain widely in pursuit of his passion for industrial heritage and social history. Early retirement allowed Dave to deepen his interests by studying public history at Ruskin college, Oxford, for which he was awarded an MA. Dave’s other skills of photography, film-making and information technology support his work in the public history arena.
19th February 2016Maryann3 CommentsEngineers, Memoirs, Mining, Processes
Read more
Search the Sites
Featured Sites
Featured
Blast Furnace Bloomery Bronze Built Environment clay Coal Cornish Mining Engine House Furnace Haulage Inclined Planes Iron limekilns Locomotives Metal Metallurgy Milling Rails Relics Restoration Smelting Steam Engines Steel Whim engines