Dreams of Steam leave you Beaming

Dreams of Steam leave you Beaming

Where did it all begin? This is an overview of the birth of the beam engine…..

Thomas Savery, a Devonian military engineer and inventor turned his attention to the problem of pumping water from the lucrative Cornish mines – we’re talking 1690s here! He successfully patented an atmospheric steam engine, which in truth closely followed the principles of a machine published by Edward Somerset way back in 1662 – such is life!

Savery’s early steam engine was mainly based on the compartmentalisation of steam by shutting off taps in order to create a partial vacuum. This was created by the condensing steam in a closed space that included the surface water deep in the mine via pipes. The suck of the vacuum dragged the water up into the pipes at the bottom of the mine and then another tap was shut off to retain it there. The tap to the outlet pipe was then opened to release the water. Needless to say, it was inefficient! It was also the only solution at the time to deal with flooding mines! Annoyingly, it could only raise water about 30ft, so mines needed a whole series of Savery pumps.

Savery’s pumps were employed ‘successfully’ for many years to maintain water supplies in various locations in London, including Hampton Court!

Amazingly, his original patent was extended by an Act of Parliament and it covered all types of steam engines that pumped water! Although Savery died in 1715, royalties from this somewhat lucky patent continued to be paid into his estate until 1733.

So, the genius that is Thomas Newcomen (also born in Devon) was forced to go into business with Savery when he invented the world’s first practical steam pumping engine. He improved Savery’s pumping engine by replacing the steam reservoir with a cylinder and moveable piston in 1710 – see? Genius!

The piston was actually originally invented by a French engineer called Denis Papin in 1690. The piston was forced up inside the cylinder by the pressure of the steam and sucked down by the vacuum created by water-cooled condensed steam. Newcomen attached the the top end of the piston to a rocking beam via a chain. The other end of said beam was attached to a pump deep in the mine underwater. The up and down movement of the beam caused the water in the mine to be drawn into the pump and forced to the surface.

Water could now be raised 150 feet! Newcomen’s Common Engines were built in large numers, with some remaining in commercial use for over 150 years!

Newcomen’s beam engines were a major leap in  technology and were soon being used to drain deep mines throughout Britain and Europe, so he should have been rich right? Wrong, that Savery patent denied him any financial success from the major contribution to deep lode mining. Newcomen died in 1729, just 4 years before Savery’s patent expired.

And there was the Hornblowers!

The Hornblowers were a Cornish family and pioneers in steam power in the 18th and early 19th century. Joseph Hornblower (1696-1762) worked as an installer of Newcomen beam engines in Cornish mines in the early 1700s.

Joseph’s eldest son, Jonathan Hornblower (1717-1780) was also a Newcomen engine master, building and installing them in the tin mines. Joseph’s youngest son, Josiah Hornblower (1729-1809) also followed the family trade and indeed became a mining master. He travelled to North America in the 1750s to advise on copper mining and built with British parts, what some say was the first steam engine on American soil!

Before I mention the next generation, we must address a certain Mr. James Watt.

James Watt was born in 1736 in  Greenock, a long way from the Southwest! But in 1754 he travelled to London to study instrument making.

Watt returned to Glasgow to work, repairing astronomical instrumentation and eventually opened a workshop manufacturing musical instruments, toys and various equipment and it was here that he first got his hands on a broken model of a Newcomen steam pumping engine. While repairing it he noticed the engine’s inadequacies and importantly, it’s inefficient use of steam. Watt developed the solution, the separate condenser and in 1765 he was able to demonstrate his breakthrough.

Funding the first full-size prototype was incredibly expensive, so this is where Matthew Boulton from the major Soho Foundry in Birmingham and his fat wallet enters the scene. Their partnership was a success and their first Boulton and Watt steam engine was complete in 1775.

With Savery’s patent long since expired, Watt was able to patent his ideas and financially benefit from it.

The Boulton and Watt engines made a 75% saving on coal in raising the steam, so the mine owners lapped them up. Importantly though, Boulton and Watt charged an additional license fee to the owners based on the coal saving made.

The company continued to develop their ideas by introducing double acting pistons, rotative motion, centrifugal governors and parallel motion to connect between piston and beam.

Watt died a very wealthy man in 1819 and the company continued to produce his engines.

And now we can introduce the Hornblower grandchildren.

Jabez Carter Hornblower (1744-1814) was Jonathan’s eldest son. He too became a Newcomen engine installer and went on to work for Boulton and Watt, building Watt’s engines too. He set up business with John Mabberley and built a new steam engine, but BOOOM, the might power of Watt’s patent saw it torn apart and poor old Jabez ended up in a debtor’s prison!

And finally, Jonathan Hornblower Jnr (1753-1815), youngest son of Jonathan Snr. He invented a compound steam engine in 1781, but his work was also successfully stopped by James Watt, who claimed it was his intellectual property.

Incidentally, the compound engine was successfully revived later on by the mighty Arthur Woolf!

There are several major contributors to the development of the early steam technology, but two more men need to be mentioned – William Murdoch and Richard Trevithick – they took the beam engines and gave us high pressure steam.

Another Scottish Engineer, William Murdoch was born in 1754 in Ayrshire. He initially worked as a millwright with his father, but made a bee-line for James Watt in 1777. In fact he walked 300 miles wearing a hand-turned wooden hat, which impressed Matthew Boulton so much that he was immediately employed.

He had an amazing career with Boulton and Watt and started there as a pattern maker. He was soon sent down to Cornwall to oversee the installation and repair of the engines in the Cornish mines. He became a master at tweaking the engines to increase their performance and so increased the revenues to the firm based on their dubious efficiency tax! Needless to say, Boulton and Watt loved him!

While keeping an eye on the ground for patent infringements for the firm, he had many original ideas of his own, which subsequently became the property of the firm. A major achievement was that of the sun and planet gear that achieved rotary motion by turning a drive-shaft.

Murdoch also invented the pneumatic despatch system and a door bell run on compressed air, iron cement, gas lighting and the use of steam to propel boats, but he was quite delighted by his steam carriage. It was a self-propelled steam road carriage – the first in Britain!

His employers weren’t in favour of this high-pressure steam and would not support him, so it was left to his neighbour – a Mr. Richard Trevithick to develop the steam road vehicle, but that’s another story!

So where can you see a surviving beam engine?

At the time of writing, there are 37 beam engines to be discovered on the GooseyGoo Industrial Explorer map. Just select beam engine in the By Category section on the map search and hit search. 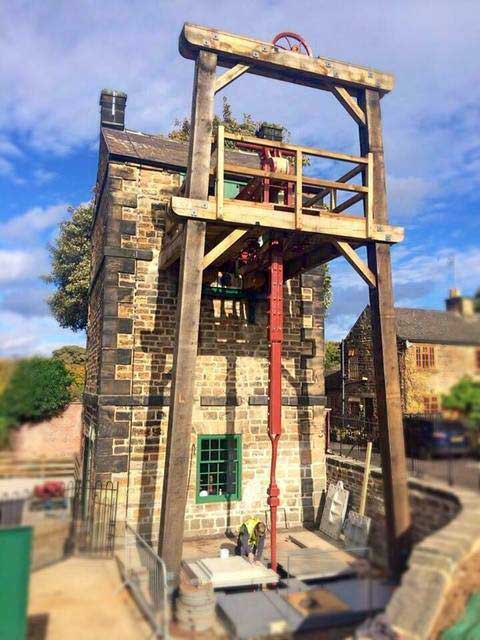 Rather nice suggestions include:

The original Newcomen engine in Dartmouth

20th September 2016 / by Maryann / in Engineers, Mining, Steam Power
No comments yet