When scouting for an area in which to establish a new iron smelting facility, early ironmasters asked themselves many questions –

Did the area have suitable topography for the construction of a furnace and its charging bridge? Was there a good and plentiful supply of water for turning a wheel? Were the surrounding landforms suitable for constructing water-control features, i.e., dams, canals, headraces, waterwheels, tailraces? Were there plentiful raw materials available in the area, i.e., iron-bearing ore deposits, fluxes, and wood for making charcoal? How could these supplies be brought in if local supplies ran out? Could the finished product be transported away easily? Was there an available labour supply? How would they get to the site? Where will the iron ingots be worked? Should a forge also be built onsite? What products was the grade of iron produced good for? Who has the expertise and experience to manage such a project? How will it initially be financed? It’s any wonder that they ever got off the ground!

The Iron Age occurred after the Bronze Age, so metallurgy was already known. But let’s not forget, we’re talking circa 900 BC onwards for Europe! (yes, that’s 1100 years ago). They needed to overcome the increased temperature required to smelt iron compared with tin and copper. And it was only in the 15th century that the introduction of the blast furnace really got the iron flowing!

Another important aspect of iron smelting is the carbon content as derived from the charcoal that it has to be burnt with. Only a small variation in the carbon content makes a big different to the hardness and therefore uses of the end product. Indeed it is the precise carbon content in the iron alloy that gives us steel! Less than 0.25 % is too little and over 1% is too much!

So in the beginning there were no blast furnaces and no coke (derived from coal). The metallurgists had to make their magic in bloomeries with charcoal, that they derived from carefully selected woodlands. Broadleaved trees were preferred because of their higher carbon content and because they produced a greater heat than coniferous trees. The size of the charcoal was also a major consideration. Charcoal larger than about 5 or 6 cms in diameter was too easily reduced to dust when transported or crushed by the weight of the furnace charge. Charcoal dust was most undesirable because it lowered the efficiency of the furnace. This served as an incentive to conduct cyclic coppicing of the surrounding woodlands, the evidence of which we can often see today!  Charcoal was fragile and was too costly to be transported very far. The demanding charcoal needs of the ironmasters, coupled with that of the other glass works, potteries, and shipbuilding saw Britain’s forests rapidly dwindle.

Bloomeries varied tremendously, but a bloomery was generally a clay and stone kiln construction with a central chimney and an access hole at the bottom. The iron-ore was mixed with the charcoal and hand-bellows got the fire going. When the fuel was spent, the bloomery was emptied out and the spongy metallic lump of wrought iron and slag was recovered. 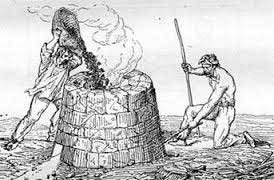 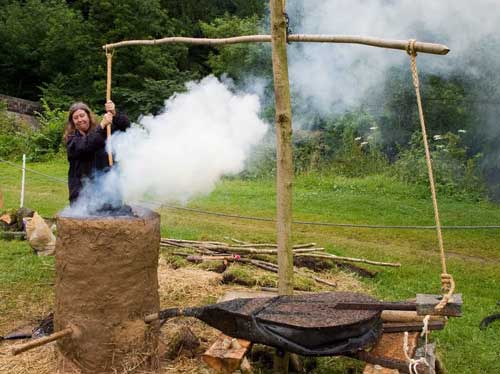 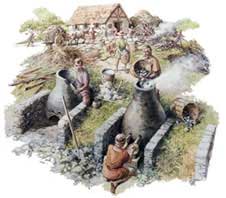 As time went on, much was learnt about the fuel and temperature variations based on the emerging product. Water-powered bellows soon replaced the hand operated ones and the bloomeries were made taller. Soon a ramp was required to fill the furnace and careful layering of products was employed. Mistakes were costly, both in time and materials, so I should think lessons were learned quickly and knowledge closely guarded.

The iron-ore and charcoal was added to the furnace via the hole in the top in alternating layers of carefully considered thickness! This kind of knowledge was passed on from ironmaster to apprentice and learned from experience not out of a book!

If a furnace was blown out or extinguished, it had to be rebuilt, causing a one-or two-month delay before high-quality iron could again be made. Therefore, it was imperative that the iron-smelting production process was not disrupted.

But the Chinese were well ahead of the game and were already using a continuous kiln at a higher temperature that was able to drive-off the oxides and liquify the iron. It was recharged at the top with iron-ore, limestone flux and charcoal and molten iron and slag were tapped-off separately at the bottom. 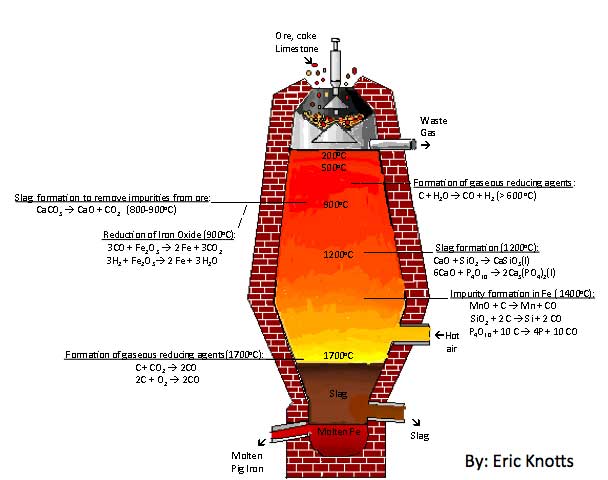 It was introduced to the Weald in 1491 or 2, but despite the arrival of the blast furnace in the 1490s, bloomeries were still operating in the West Midlands region beyond 1580. And in Furness and Cumberland, they operated into the early 17th century!  The last one in England (near Garstang) did not close until about 1770.

Blast furnaces were the new fashion. The well-known bloomery was being replaced with the more permanent and larger blast furnaces, with waterwheel-driven bellows and charging ramps.

The monks cottoned on quickly and blast furnaces were thrown up at Abbeys such as Tintern and centres such as the Forest of Dean and Ironbridge emerged.

The technology didn’t change drastically until 1709, when Abraham Darby of the Coalbrookdale Co in Ironbridge introduced Coke (a form of coal) as a fuel in place of charcoal. This allowed the size of furnaces to physically increase, because charcoal collapsed under the weight. So improved were the results that coke was almost universally adopted within 100 years.

Another improvement was that of pre-heating the blast air. It was achieved by using heat recovered from the exhaust gases. This enabled the temperature within the furnace to remain uniform and high!

Amazingly, (apparently) you can tell from the texture and colour of the slag whether or not a furnace had a hot or cold blast!

They also pre-mixed the coke and iron-ore and roasted it, producing sinter. This helped to drive-off impurities and improve the iron product.

All in all, a proper job!

15th December 2015 / by Maryann / in Processes, Water Power
No comments yet