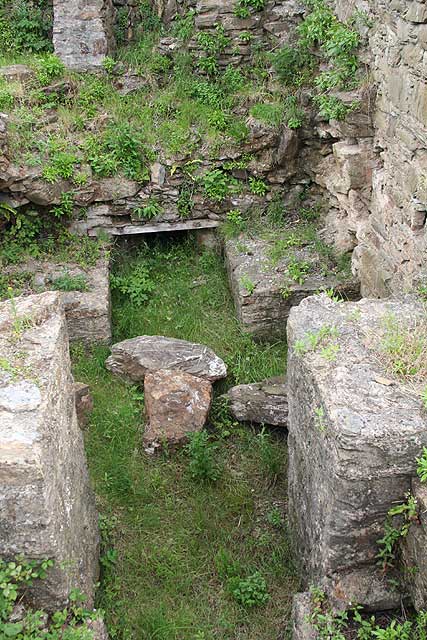 The silver-lead mines at Combe Martin were worked in medieval times!

They became particularly well-known after the Crown became directly involved at the end of the 13th Century.

The Combe Martin Silver Mines were in operation over 800 years ago!

The Combe Martin Silver Mine Research & Preservation Society have made great strides into the excavation of various sites and Exeter University have also undertaken valuable research.

There was no archaeological evidence of early post-medieval lead smelting from the Combe Martin Silver Mines until Trevor Dunkerley excavated 3 test pits in 2001-2002. The first two trenches were positioned in the garden of Christmas Cottage NGR: SS 5868 4631 and the third in the garden of an adjacent property called Middleton. Large quantities of glassy, opaque, grey / green / blue slag were recovered from all three trenches. The slag was identified as probable waste from lead smelting and John Allan of Exeter Museum Services dated the slag-rich deposits to the 16th and 17th centuries by means of the associated pottery and clay pipe fragments.

Significant amounts of coal has also been found in, what is believed to be, an ore hearth smelting operation, treating lead-silver ores, dating from the late 16th century through to circa 1690. The find suggests that coal was used to fuel silver/ lead smelting, up to 100 years before its common use in lead smelting using the reverberatory furnace, and perhaps 200 years earlier than the previous evidence for its use in the ore hearth!

The mines were also worked for iron and they were particularly productive between 1796 and 1802. Find out more HERE!

There is also a grade II listed Mine Forge built in1837 nearby.

There aren’t enormous landscapes of remains, rather you will notice human-sized holes in the cliff faces along the coast. Inland remains are somewhat obscured by private dwellings, however Harris’s mine is being excavated and the base of the engine house of William’s Shaft by the CMSMR&PS!

The grade II remains of the bob wall and basement levels of William’s Shaft engine house can be seen. The engine house was built to pump the 27 fathom (162 ft) deep Williams Shaft, which is sited midway between Old Combmartin Mine (downslope) and Harris’s Shaft. The steam engine was a 50” cylinder, manufactured by the Cornish Copper Co, Hayle, and was set to work in March 1837. It pumped at 10 strokes a minute to de-water several mines in the parish. The engine was later installed at Golden Mine in Cornwall. More information can be found in ‘Exmoor’s Industrial Archaeology’, Exmoor Books, 1997, in a chapter written by Peter Claughton.

Director’s shaft (at SS 588643) was pumped using flat-rods linked to the balance bob at this site.