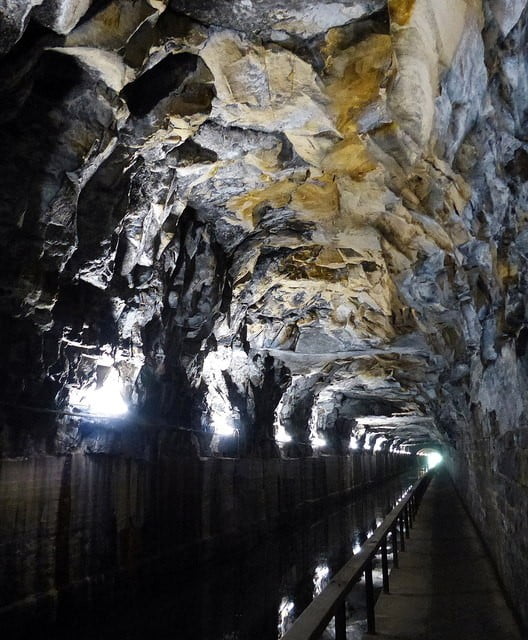 The Falkirk Tunnel is the longest canal tunnel to be built in Scotland!

It was completed in 1822 for the Glasgow to Edinbugh Union Canal.

The tunnel is 630 metres long and at least 3.6 metres high. One of the reasons for its length was that the owner of Callander House would not allow the canal to be dug within sight of the house.

Other names for the tunnel are: Hallglen Tunnel; Prospect Hill; and Edinburgh and Glasgow Union Canal Tunnel, but it is in Falkirk, so Falkirk Tunnel seems appropriate!

It was built between 1818-22 to the designs of Hugh Baird and takes the Union Canal through a ridge W of Callendar Park. It is patched with masonry and brickwork and at either end there is a round arch set in a concave masonry facing. The tow-path inside the tunnel has been renovated and provided with a handrail for the use of pedestrians.

The limestone was excavated by hand using picks and shovels and early gunpowder, and was cut through bare rock and is not lined – it is therefore rather wet!

In order to have several faces operating simultaneously, three shafts were sunk.

It was only needed because the owner of, the posh, Callendar House,  William Forbes, refused to allow the canal to pass within sight of his property! Some people!

The Laughin` Greetin` bridge is just beyond the tunnel.

Enjoy the area and of course, don’t miss the nearby Falkirk Wheel BoatLift!