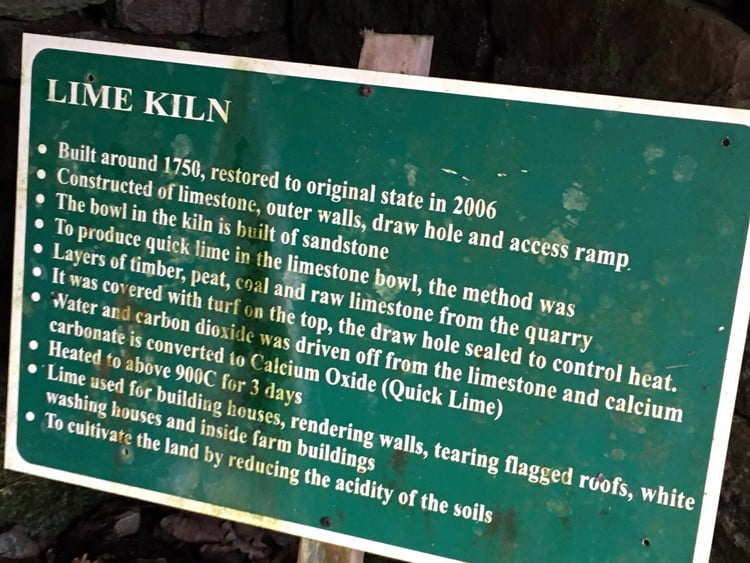 The Flintergill Limekiln was built circa 1750 and restored in 2006.

It still has its ramp!

Flintergill Limekiln is one of several in the area. The outer walls, draw hole and access ramp are built from local limestone, but the bowl in the kiln is built with Sandstone.

The kiln was built to produce quick lime to improve soils and for use in building, as mortar and finishes.

Layers of timber, peat, coal and limestone were prepared in the kiln and then covered with turf. When it was burnt the temperature was controlled by opening and closing the draw hole.

The kiln was typically burnt for 3 days at over 9oo degrees celcius.

Water and carbon dioxide were driven off and the limestone and calcium carbonate were converted into Calcium Oxide, and slaked with water to produce Quick lime!

Enjoy some of the many glorious walks in the area and keep an eye out for the kilns and quarries!

Incidentally, Dent is the only village in Dentdale and has delightful cobbled streets! There is a fountain of pink granite in the village centre, where the three cobbled streets meet, to commemorates Dent’s links with Adam Sedgwick, (1785-1873), professor of geology at Cambridge University, who was one of the greatest field geologists of his time.

Dent is also famous for its knitters – in the 18th century, both men and women knitted, often while walking to the fields. Their output of hand-knitted gloves and socks was enormous!

You can find a wealth of information on the working lives and social customs of the Dalesfolk who inhabited this beautiful area in times past at the Dentdale Heritage Centre.

After Dent, the valley winds its way through Cowgill, on its way to Dent Station, some 4.5 miles from the village. Dent Station is the highest railway station in England, at over 1100 feet above sea level, on the famous Carlisle to Settle Railway! The line crosses the huge viaducts at Arten Gill and Dent Head, built of massive blocks of Dent ‘marble’, from the now-disused quarries nearby, before going through the Blea Moor tunnel to Ribblehead viaduct.

Nearby Cowgill is interesting too! There lies one of the most remote breweries in Britain – The Dent Brewery!  Brewery trips are available – just saying!