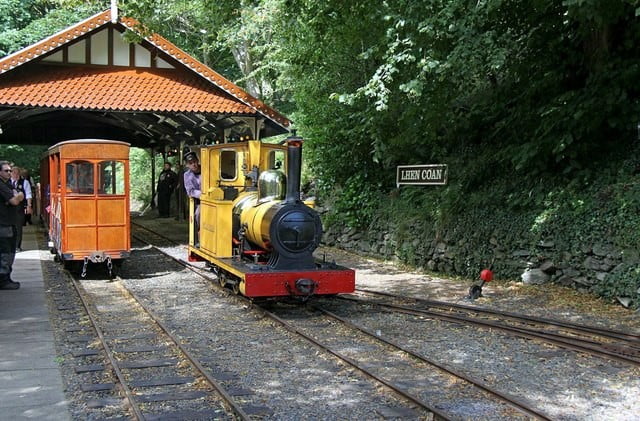 The Groudle Glen Railway is a 2 ft narrow gauge railway north of Douglas in the Isle of Man.

It is owned and operated by a small group of enthusiastic volunteers and operates on summer Sundays.

The line was built in the late Victorian era in response to increasing demand for transportation down Groudle Glen brought on by the introduction of the Manx Electric Railway. The headland was developed, a zoo created and the railway was built!

The 2 ft (610 mm) narrow gauge line ran from the upper part of the glen, Lhen Coan, to the zoo at Sea Lion Rocks.

The line opened on 23 May 1896 and started with one engine, called Sea Lion, and three coaches. The engine was built by W.G. Bagnall Ltd. of Castle Engine Works, Stafford. The line became so popular that a further engine, Polar Bear, and additional coach stock was purchased.

The railway operated very successfully until the outbreak of World War I,  when all services stopped and the zoo was closed. When the line re-opened the locomotives were overhauled and returned to service but by 1921 they had been replaced with battery-operated engines – these proved troublesome and they were dropped.

The original steam locomotives were then overhauled and returned to service.

The railway once again closed during World War II and the zoo closed for good, it being reported that the animals had been released! A landslide during the war years ensured that services could not return to the original terminus.