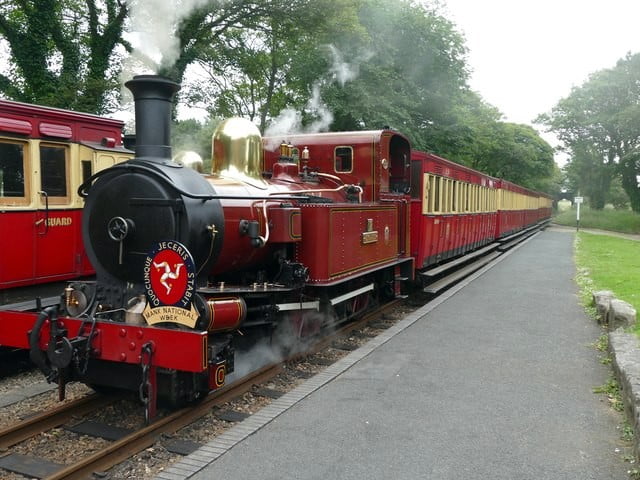 The Isle of Man Steam Railway is the longest narrow gauge steam line in Britain that still uses its original locomotives and carriages.

The 3 ft narrow gauge railway was opened in 1874 and runs through the Island’s charming countryside between the Island’s capital and a range of destinations in the south.

Originally the southern route, which is around 15.5 miles long, was part of a much larger steam railway network which used to serve Peel in the west, Ramsey in the north and the small mining village of Foxdale.

A one way journey along the beautiful Manx countryside running the full length from Douglas to Port Erin takes an hour to complete. In July and August, the peak months of the holiday season, there are 7 return trains a day through the countryside, one of which is an evening service.

Pullman style fine dining can be experienced on the Isle of Man Steam Railway’s beautifully restored Dining Car. Built in 1905 and restored in the Spring of 2013, the plush Dining Car is one of only a handful of fine dining narrow gauge dining cars in the world. Offering a mouth-watering menu using only the finest Manx produce, the Dining Car is fully licensed and has a carefully crafted list of 14 wines and a cocktail Bar Car.

Many of the Island’s heritage attractions in the south of the Island are located near to railway stations making it a convenient way to travel. Simply sit back and revel in the spectacular Manx scenery and countryside as it gradually passes by you.

Other railways on the island are the Snaefell Mountain Railway, the Manx Electric Railway, the Groudle Glen Railway and the Horse Tramway.

See a map of the Isle of Man Steam Railway Stations – HERE!