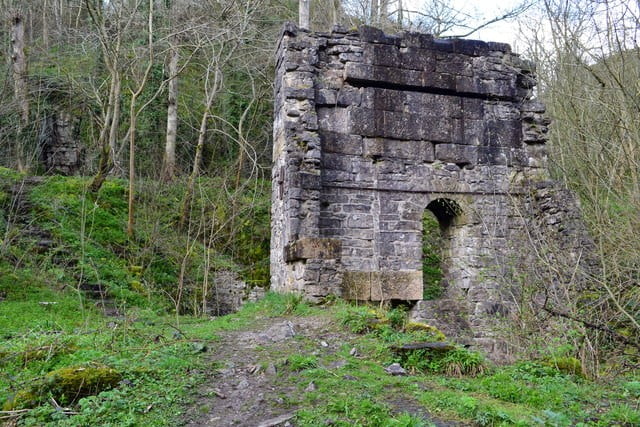 The Mandale Engine House held a Cornish beam engine, that pumped water out of the lead mines below.

It is one of the oldest lead mines remaining in Derbyshire, with evidence of mining from the 16th century!

The remains of Lathkill Dale and the Mandale mines are rare survivals dating from at least the C16 through to the late C19, with well-preserved remains of rare features such as the remains of shafts, coes, gin circles, stopes, engine houses and other buildings, crushing circles, ponds and buddles, and the aqueduct and aqueduct leat. These sites show the historical and technological development of what was once a far more extensive, multi-period and regionally distinct mining landscape.

Historic England report that it is an exceptionally well-preserved site displaying a diversity of multi-phased surviving features – of national importance!

Lead mining in Derbyshire may have begun as early as the Late Bronze Age, with lead finds at MamTor and Gardoms Edge, but no evidence for mining, ore processing or smelting at this time has been recorded.

Numerous finds of lead ‘pigs’ (ingots of smelted metal) from the Roman period have been found, which indicate production in the Mendips, South Shropshire, Derbyshire and the Yorkshire Pennines.

Mining at Mandale Rake was first documented in the 13th century, and recorded on the north and south sides of the River Lathkill from 1495, although the exact location of these early workings is unknown. Mandale Rake was mentioned in 1585 as containing `the beste orre in the Peke’ and by 1615, the mine’s excavations were over 300ft deep.

Water drainage was a continual problem. To aid drainage and increase ore extraction, the excavation of the Mandale Sough (drainage tunnel, like an adit) was begun in 1798, but production was slow and by 1836 work had virtually ceased.

In 1839, the Mandale Mining Company was formed – they erected a steam engine and waterwheel to drain the mine below the sough.

The wheel was apparently erected adjacent to Lodge Shaft in 1841, but Sanderson’s map of 1834 shows a 52 ft-diameter waterwheel in operation at the mine, so there were probably several!

As part of the water drainage system, the Company extended the aqueduct leat at Lathkill Dale Mine and constructed an impressive aqueduct which carried the water by launder (supported wooden channels) across the river from Carter’s Mill. The wooden launder was supported by stone columns, ruins of which can still be seen today!

The waterwheel became inadequate for the task and a steam Cornish pumping engine was erected in 1847. The venture was short-lived however, as rising costs led the Company to wind up activities in 1851 and offer equipment for sale in early 1852. Mandale Rake continued to be worked small-scale by individual miners until 1867.

The ruins of Mandale Mine’s beam-engine house are now in the care of the Peak District Mines Historical Society.

The Mandale Engine House was constructed out of limestone and sandstone and survives to 6m in height. The northern bob wall on which the beam of the engine was supported is the best preserved. The flued chimney up the hillside was for the boiler furnace. The below-ground remains of the boiler house lie adjacent to the Mandale Engine House and it contained 2 Cornish boilers.

Check out the write-up on Derelict Places, with more images – HERE!

Visit Over Haddon, enjoy the tea rooms and set-off for the most glorious walk where you will be treated with the out mining museum of lead mining in Derbyshire.