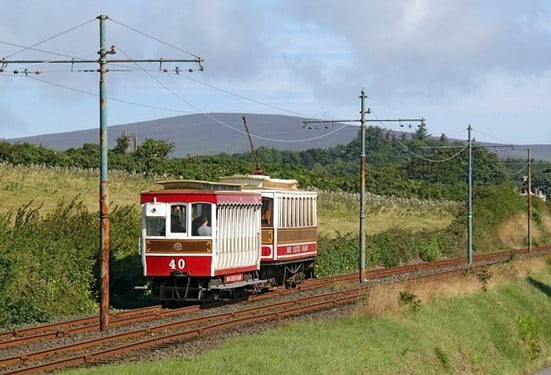 The Manx Electric Railway has been running since 1893 along the eastern coast of the Isle of Man.

The majority of Victorian & Edwardian infrastructure and rolling stock is still in use!

The Manx Electric Railway is an electric tramway that connects Douglas, Laxey and Ramsey on the Isle of Man. It connects with the Douglas Bay Horse Tramway and with the Snaefell Mountain Railway at Laxey.

The line is 3 ft (914 mm) narrow gauge and is 17 miles (27.4 km) long. It is electrified using overhead line at 550 volts direct current. Initially the trams used pairs of Hopkinson bow collectors (still used on the Snaefell Mountain Railway, good in strong winds on the mountain!) but by the turn of the 20th century they were fitted with trolley poles.

Originally the service was provided by about 24 closed motor tramcars and the same number of open trailers: the earliest of these date from 1893 and almost all are pre-1910.

Two of the three cars that opened the line in 1893 are still in use, and are the oldest electric trams at work on their original line in the whole world!

The line operates a seasonal timetable with services from Douglas terminating at Laxey or Ramsey, with some short workings in connection with the Groudle Glen Railway in peak season, and limited evening operation as far as Laxey in peak season to tie in with evening services on the Snaefell Mountain Railway, which since 2009 has provided a weekly “Sunset Dinner” service including a meal at the summit.

Check out their website for train times and events – HERE!