Near Oldbury, shropshire
Add an image Suggest an edit 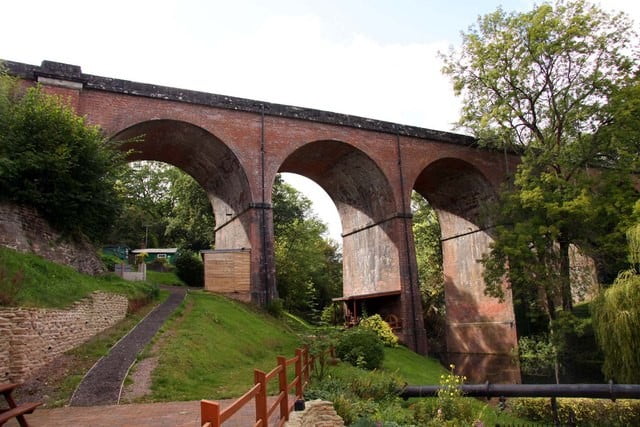 It carries the SVR over a small valley where a stream runs past Daniel’s Mill.

Oldbury Viaduct (Bridge 33) is situated a short way south of Bridgnorth. The viaduct is built of red brick with a sandstone parapet, and has five arches with at 33ft span.  After closure of the section of line, BR engineers intended to demolish the structure but were refused permission by the mill owner, a supporter of the railway – thank God!

In 1972 work began to refurbish the structure and it was substantially rebuilt by 1975-76.

The Severn Valley Railway is a heritage railway in Shropshire and Worcestershire. The 16-mile (26 km) heritage line runs along the Severn Valley from Bridgnorth to Kidderminster, crossing the Shropshire/Worcestershire border, following the course of the River Severn for much of its route. The railway is one of the most popular heritage railways in the country as well as being the sixth-longest standard gauge heritage line in the United Kingdom, yet Bridgnorth is the only station building with any form of listingprotection?!

The line immediately south of the viaduct was one of the many areas damaged in the 2007 storms.

Pay your respects to the monument by visiting Daniel’s Mill – and say thank you for sticking up for our industrial heritage!