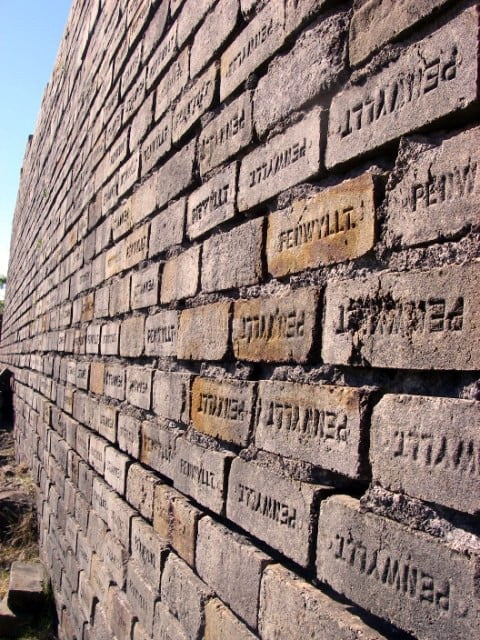 Penwyllt Dinas Silica Brickworks was the reason for living here.

The bricks were destined for use in industrial furnaces.

Kershaw & Pole Ltd opened a brickworks at the remote Penwyllt site in 1865 and their main product was producing silica bricks for furnaces – sometimes called refractory bricks. At first limestone and the silica were quarried from the hill immediately behind the works but by 1885 limestone was being quarried on the hillside way above Penwyllt and sand was being quarried at Pwll Byfre a couple of miles away.

By 1895 the works was known as Penwyllt Dinas Silica Brick Co Ltd and it is around this time that an incline railway of 2′ 3″ gauge was constructed to bring the raw materials down from the upper quarries.

A narrow-gauge railway, with a rope worked incline, transported silica sand and stones to the brickworks, which was adjacent to the Neath and Brecon Railway, which on 1 July 1922 became part of the Great Western Railway.

The people of Penwyllt did quarrying, made quicklime and silica bricks. So as well as the quarries and brickworks, there are also lime kilns scattered around. Its fortunes rose and fell as a result of the Industrial Revolution in South Wales.

Although closed, the works remained basically intact until the early 1950s.

The works was mostly dismantled in the 1950s but the site has remained undeveloped and many remains are still visible. Railway archaeology is much in evidence and looking at aerial views courtesy of Google Earth will highlight the main areas to search. The incline is there with many wooden sleepers still in place and the winding house and locomotive shed foundations can be found at the top of the incline. Down at the brickworks site the remains of the early kilns are clearly defined as are the earthworks of the railways along with a few building remnants.

It is now an important caving centre.