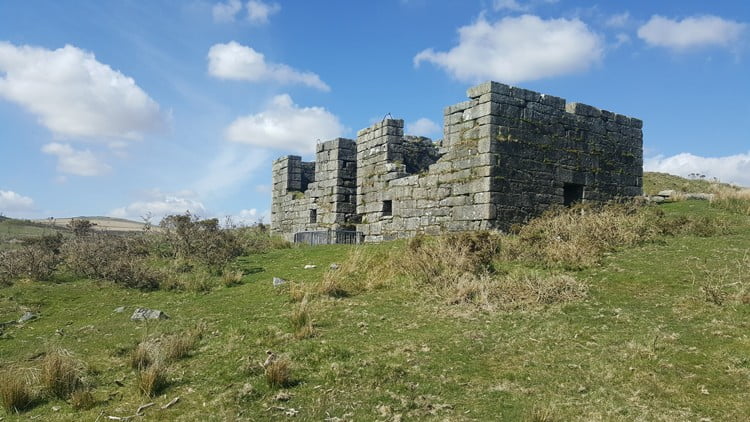 The gunpowder factory at powder Mills on Dartmoor, is Listed Grade II and comprises of at least 18 buildings involved in the production, storage and management of gunpowder.

The gunpowder factory at Powder Mills contains a complete range of buildings and other structures and features associated with the gunpowder industry. Many of the buildings remain essentially intact, with only the roofs and machinery having been removed.

Many of the buildings contained machinery which was powered by water which was carried to the site by 3 large leats from the East Dart and Cherry Brook rivers.

The system of leats and trackways is fascinating and gives us a good insight into the character of the factory.

The gunpowder factory was established in 1844 by George Frean and a lot of cash and was operational by 1846. It remained in use until 1897 when it closed as a result of increasing competition from flashy new dynamite and a slump in local mining activity.

In 1844, George Frean, a wealthy man from Plymouth, formed the Plymouth and Dartmoor Gunpowder Company. He applied to the Duchy for a licence to build the gunpowder mills on farmland belonging to Cherrybrook Farm. The location provided central access, remoteness and an available water supply from the nearby Cherrybrook which would provide a power source. It also had a good provision for the planting of a covering of alder trees which could be used for charcoal, as well as providing a natural wind-break.

The process was inherently dangerous and to reduce the damage done by any accidental explosions, the buildings were situated at a safe distance from each other and each had a flimsy roof which would have allowed any explosion to be carried upwards. Several explosions are known to have occurred at Powder Mills and fortunately these precautions may have ensured that no workers were ever killed.

The blackpowder was made from a mixture of sulphur, ground saltpetre and charcoal. There were various grades of powder but a normal mix would consist of 75% saltpetre, 15% charcoal and 10% sulphur. The saltpetre was imported mainly from India whilst the sulphur came from the Vesuvius, Stromboli and Sicilian volcanic areas of Italy. The charcoal came from locally sourced burners and was made from alder, willow, juniper, dogwood and silver birch.

Each ingredient was separately ground in a grinding mill and the required quantities were then mixed and blended in special barrels. This mixture was crushed, mixed and churned to form the crude blackpowder. Depending on how fine the powder needed to be the whole process could take up to 24 hours to complete.

Once the powder had been incorporated it would finish up looking something like a ‘cake’ and was called the ‘ripe charge’. The charge would be stored for a short period and then compressed into 1 inch slabs.

The slabs of ‘ripe charge; would be broken into granules by means of using a wooden mallet, then be fed through a series of graduated sieves. The grains were the ‘tumbled’ in gauze covered cylinders in order to collect any dust particles. The whole of this process was called ‘corning’.

The ‘corned’ grains were then tumbled again often with the addition of graphite or black lead which would coat the grains this was known as ‘dusting’. The purpose of this was to give the powder a waterproof coating thus making the end product suitable for using in damp mines or quarries.

The final process was to dry the gunpowder in trays, this was either done in the open-air or in rooms heated by ‘Gloom stoves’ and latterly by steam.

Some of the buildings identified at Powder Mills are:

Hob-nails were a big no-no!

For safety reasons, only wooden and copper handed tools were used and all the workers that were involved in the mixing process had to wear leather aprons and soft soled boots. Some of the floors in the more ‘volatile’ areas were covered in tanned leather and all in all everything possible was done to reduce the risk of a spark igniting the powder.

The finished barrels would finally be transported by horse and cart to various storage and distribution centres known as ‘magazines’. These were in Taviton, Ashburton, Newton Abbot, Exeter and Plymouth. From these centres the blackpowder would be sent to the various mines and quarries either by horse or cart or by rail.

Historic England have a good deal to report on this site – see their full report – HERE!

“Gunpowder was the only explosive available for military use and for blasting in mines and quarries until the mid-19th century. Water-powered manufacturing mills were established in England from the mid-16th century, although powder had been prepared by hand for at least 200 years. The industry expanded until the late 19th century when high explosives began to replace gunpowder. Its manufacture declined dramatically after the First World War with British production ceasing in 1976. The technology of gunpowder manufacture became increasingly complex through time with the gradual mechanisation of what were essentially hand-worked operations. Waterwheels were introduced in the 16th century, and steam engines and water turbines from the 19th century. Pressing and corning were also introduced between the 16th and 19th centuries to improve the powders. Pressing improved the explosive power of the mill cake and corning broke the pressing cake into different sizes and graded it with respect to its fineness. Additional techniques were developed throughout the 17th, 18th and 19th centuries to improve the quality and consistency of the finished product, and this in turn resulted in a variety of types of powders; ranging from large coarse-grained blasting powders used in mines and quarries, to fine varieties used, for example, in sporting guns. Gunpowder manufacturing sites are a comparatively rare class of monument with around 60 examples known nationally. Demand for gunpowder centred on the London area (for military supply), other ports (for trade), and the main metal mining areas. Most gunpowder production was, therefore, in Cumbria, the south west, and the south east around the Thames estuary. The first water-powered mills were established in south east England from the mid-16th century onwards, and many of the major technological improvements were pioneered in those mills. All sites of gunpowder production which retain significant archaeological remains and technological information and survive well will normally be identified as nationally important.”

The people employed in the manufacture of the gunpowder were officially classed as ‘gunpowder makers’, in addition the mill employed blacksmiths, carpenters, wheelwrights, coopers and wagoners.

These remains need to be seen – grab a dog and fill your water bottle – you’re going on a hike for heritage!