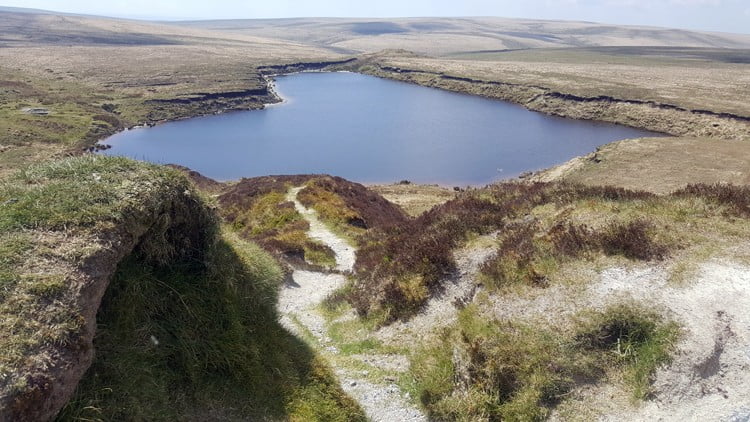 Red Lake China Clay Works has the classic sky tip and a beautiful deep red lake, in the most remote place!

Clay was hosed out from a deep pit and the slurry was transported via pumps to settling beds at Greenhill about a mile away. After a week or so of settling the sluices were opened and the clay in suspension flowed down pipes some 7 miles to the clay processing works at Bittaford near Ivybridge.

There was a railway which ran alongside the clay pipes that led down to Ivybridge.

The railway was only used for moving people and basic materials and is popularly known as the Puffing Billy track – although on the map it is named as The Two Moors way. The railway was of 3ft gauge and small steam engines pulled 3 passenger carriages. Only the trackway remains – the rails are long gone, although sets and remnants can be discerned by the experienced eye.

Today, Red Lake is a fantastically remote place. There are 3 deep pools, dark red from the surrounding peat, ruined buildings and of course the striking sky tip.

Park at Shipley Bridge (also known as the Avon Dam Car Park) and take the 8 mile circular route along the tramway to discover the site and then ramble back by the delightful Avon Dam.

World War I hit all industries hard, not least because of the shortage of men, but also because of the rise of cost in coal – anyway, the clay works at Red Lake got going again at the end of 1915.

In the autumn of 1915 there were 50 men employed at Redlake.

In October 1915 the colour and quality of the clay resulted in a contractor refusing to take delivery of an order for the whole output of the pit. In fact, two grades of clay had been found; one of good quality from veins running NNW to SSE and one ‘of yellowish colour only suitable for producing bricks’, present in much greater quantities surrounding the better clay.

The poorer clay carried appreciable amounts of tin oxide and a small amount of tin was produced between 1915 and 1919, with a stamping house costing £300 erected at Cantrell in March 1916.

In 1916 over a quarter of a million tons of clay and sand were removed and the double track ‘sky’ tip was constructed at Redlake. Production continued on a small scale but by 1917 only a quarter of the number of workmen were employed compared to when the War broke out – mostly older men and boys, although there were also some women doing relatively light tasks at Cantrell and Redlake.