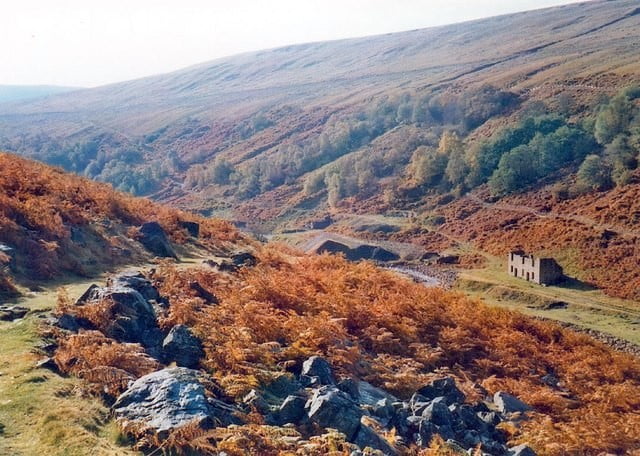 Sir Francis Level Lead Mine was one of the first to exploit the benefits of tools powered by compressed air!

It also has an underground hydraulic engine that is an incredibly rare survivor.

Sir Francis Level Lead Mine is one of loads of mines found in Gunnerside Gill, just north of the village of Gunnerside. The Sir Francis Level was first started in 1864, nearly 1km to the south of the main mining area. It was driven northwards to act as a drainage and exploratory level and to reach lead deposits in the Fairfold Vein.

The process was sped up with the introduction of compressed air drilling machinery.

An adit, 1.4km (almost a mile) long leads to a shaft which was sunk to gain access to lower levels and contains lift cages and winding equipment which are in a good state of preservation. A collapse near the entrance means that access to the mine is via an airshaft part way along the tunnel.  The collapse also means that the water in the tunnel has backed up and can be up to 1.5m (5 feet) deep depending on the weather.

The mine takes its name from the son of Sir George Denys who drove the level.

Gunnerside Gill (or Ghyll) is a small valley in the Yorkshire Dales which branches off Swaledale into moorland to the north of Gunnerside and the site of intensive lead mining in the 18th and 19th centuries. The valley still contains much evidence of its industrial past. Streams were dammed, and the water was released as a torrent to scour soil off the surface and reveal lead ore (galena) seams.

The resultant scars are known as hushes.

Discover it for yourself with this excellent walk by Discovering Britain – HERE!

A small excerpt from the HE entry is;

“The lead mining remains of Gunnerside Gill represent an exceptionally well preserved lead mining landscape, containing a wide range of lead industry sites and individual features. It is well documented historically from the 17th century onwards and the phased programme of archaeological survey further contributes to the understanding of the remains. The gill is accessible to the public and the archaeological remains form an important educational resource and public amenity. The main mining area within Gunnerside Gill was where the Friarfold and Old Rake Veins converged with a number of smaller veins to form the highly mineralised ground of Lownathwaite and Melbecks Moor. This resulted in a long mining history represented by many varied features. On the Lownathwaite plateau, the monument includes a fine set of hush dams and other water management features alongside a number of undisturbed shafts with small scale ore processing areas. Many of these shafts are thought to pre-date the hushes, and are thought to be 18th century and earlier. On the east side, the system of hushes is even more complex (as the veins diverge). The 19th century ore works and horse levels on both sides of the beck retain a wide range of nationally rare features. The Bunton and Sir George washing floors are unusual, retaining well standing remains as well as timber structures partly buried in rubble and dressing waste.”

Many of the juciest remains are underground – don’t get yourself damp and dirty – check out pictures HERE!