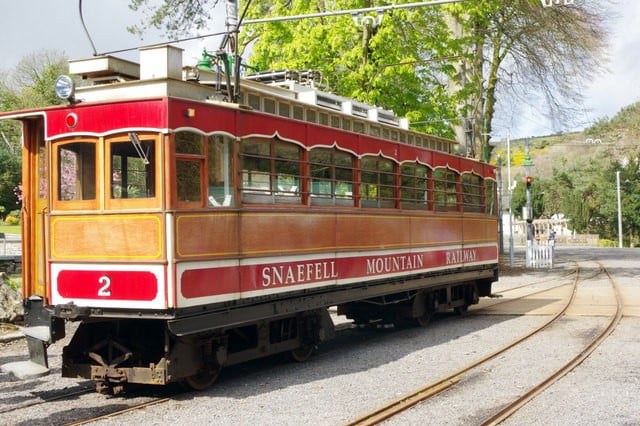 The Snaefell Mountain Railway is a unique Victorian enterprise which winds its way up 2,000 feet to the top of Snaefell.

It’s the only place in the British Isles where you can see 7 kingdoms – England, Ireland, Scotland, Wales, Heaven, Mann and the Sea – just by turning around!

The Snaefell Railway was built in 1895 and starts at Laxey, where the massive mining waterwheel is!  The mountain’s summit is 2036 feet (621 metres) above sea level.

It connects with the Manx Electric Railway (MER) in Laxey and the line is 5 miles (8.0 km) long, built to 3 ft 6 in (1,067 mm) gauge and uses a Fell Incline Railway System centre rail for braking on the steep gradients. It is electrified using overhead wires at 550 volts direct current, with bow collectors.

The name Snaefell, or Sniaull in Manx, comes from the Norse for Snow Mountain.

The line was originally surveyed by George Nobel Fell, the son of John Barraclough Fell who invented the Fell Incline Railway System. This survey was for a steam-operated railway using the Fell centre rail for both propulsion and braking, and the scheme was approved by Tynwald in 1888 but not built. In 1895 the Snaefell Mountain Railway Association (SMRA) revived the plans, and adopted the route of the earlier survey. As the line was built entirely on land leased by the association there was no need for statutory powers, and the line was constructed very quickly and opened on 20 August 1895.

The line was built from scratch as an electric railway without Fell traction equipment, relying on normal rail adhesion for propulsion up the steep gradients, however they are fitted with Fell braking equipment for use when descending.

The weather on Snaefell is as famous as the railway itself, while the weather may be sunny and clear down in Douglas, it may be a completely different story at the top of the mountain. You can be standing with your head in the sunshine and your legs in fog! To ensure that your journey provides unlimited views why not check out the mountain’s webcams?

Services operate at regular intervals between April and September – needless to say, there is no winter service!