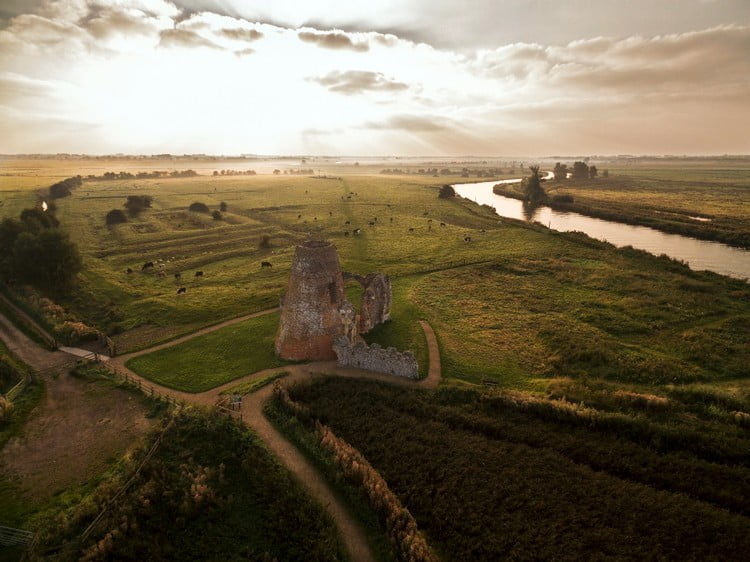 St. Benet’s Abbey Mill was an oil mill and of considerable rarity and interest!

St. Benet’s Abbey Mill is a two-storey building attached to a wet ‘dock’ nearby, which would have allowed trading vessels to load and unload easily.  It was almost certainly built to process colza or rape seed, which at that time was used for lighting and lubrication.

Incredibly, the mill was built in the middle of an abbey complex, which includes dwellings, religious sites, fish ponds and all sorts! It is thought that religious hermits lived here as early as the 9th century.

By the time of the Domesday survey, St Benet’s Abbey owned sizeable areas of land in north-east Norfolk and was the dominant landowner.

The oil production process was complex, hot and smelly! The oil-bearing seeds were crushed by stones and the resulting pulp was heated in pans before being bagged up and placed in ‘stamps’ to press it and extract the oil. The residue was crushed and pressed again to produce oil cake, sold as cattle feed.

The crushing stamps made oil mills deafeningly noisy and they were known as horrible places to work.

Later on, the mill was used to drain the land. In the 1850s at least three different photographers captured images of the mill when it was still working to drain the marsh.

The ‘oylmen’ and later, ‘marshmen’, who operated the mill lived in the cottage on the site, which for much of the 19th century also functioned as The Chequers, a wherryman’s inn.

The mill was reputedly damaged in a gale in 1863, which ended its working days, and the last marshman to run both The Chequers and operate the mill, William Grapes, left the site in 1867.

By the 1870s the former Chequers had been divided into 2 cottages and was known as a stopping place for eggs and butter for the emerging holidaymaker trade. The building fell into decline and became the victim of a fire in the early 1890s; from then onwards the St Benet’s Abbey site has been uninhabited.

Now owned by the fabulous Norfolk Archaeological Trust, a 2-year project took place between 2012-2014 to conserve the standing remains of the abbey and mill, and to provide more information and better access to the whole site.

On their website, you’ll find info about visiting, the archaeology, the timeline, wildlife and events, including FREE seasonal guided tours.