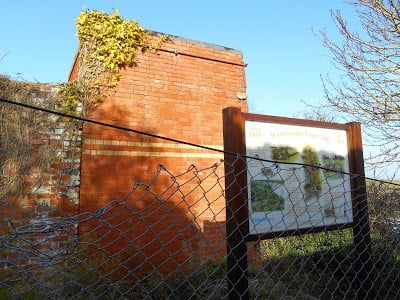 Wansbrough Paper Mill was the UK’s largest manufacturer of coreboard!

Wansbrough Mill in Watchet, Somerset, was initially known as St Decuman’s and paper was made in the mill by hand using the vat method. However, with access to ample supplies of wood in the Quantock Hills, the earliest records of paper making in the community date back to 1652.

William Wood used an old cider press to squeeze the water out of his paper and he produced one cart of paper per week!

But from the 1860s, the factory started the process of converting to steam power. The Lancashire boilers thst were installed has draughting problems , so in 1865 a square-shaped chimney was built of local red bricks from Wellington Brickworks. Its sections were each marked by a double-course of buff brick from Ebbw Vale, and further bound by iron-bands. Originally 75 feet (23 m) in height, two further sections were added totalling 15 feet (4.6 m), to provide additional up-draught.

The chimney survived until 2011, but was demolished because it was deemed unsafe by the owners and not worth saving by Historic England.

A fire destroyed most of the mill in 1889 but by 1899 five paper machines were in operation and Wansbrough Mill became the largest manufacturer of paper bags in the country.

The mill was rescued from bankruptcy in 1903 by William Reed and it stayed in the ownership of the Reed family and the Reed & Smith group until acquired by St Regis International in 1978.

David S Smith purchased the mill in 1986 and in 2011, Wansbrough Mill was the largest manufacturer of core board in the UK. It also produced test liner as well as envelope and wrapping papers. The total annual production capacity of the mill was around 150,000 tonnes.

Now a days the remains are a modern mess, with the historic relics somewhat camoflauged. The site is destined to  become half residential and half light industrial units and the only remains may well be the base of the square-planned, red-bricked chimney.

The remains of the Wansbrough Paper Mill Chimney can be seen from the footpath that runs from the junction of Harbour Road, South Road and Brendon Road to St Decuman’s Church (grid reference ST 065 429).