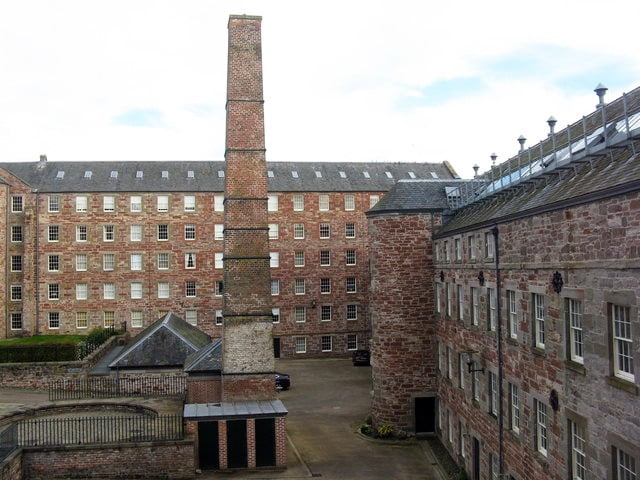 Stanley Mills is one of the best-preserved relics of the Industrial Revolution of the late 1700s.

Stanley Mills was built in 1786 at a hairpin bend in the River Tay – a spot where immense water power was available. Machinery was powered initially by waterwheels, and later by electricity from water-powered turbines.

Arkwright is world-famous as a pioneer of the Industrial Revolution, known for the technical innovation of his machinery and for the ‘factory system’. This, above all else, brought social and economic change to Scotland and much of the world.

Stanley Mills is the best-preserved of all the mills in which Arkwright had direct involvement.

Mill buildings were added, adapted, expanded, shut down, reopened and demolished as the market changed and technology evolved.

By the late 1700s, Perthshire had a well-established textile industry. Linen was made from locally grown flax, using water-powered machinery.

Initially, Stanley Mills thrived. The East Mill was added to process flax, but was gutted by fire in 1799. Because of this, and a slump caused by war in France, Stanley Mills closed down.

James Craig bought the mills in 1801, with financial help from David Dale, founder of the New Lanark mills. But the business failed again and the mills closed in 1813.

In 1823, the mills were bought and reopened by Buchanan & Co. The Glasgow company enlarged the East Mill and built the Mid Mill, the gasworks and, in Stanley village, a church and new housing. It flourished for 30 years.

Owner George Buchanan helped to create a rail link to Stanley in 1848, making the transfer of raw cotton from Glasgow much easier. Buchanan sold the mills in 1852.

The next owner, Samuel Howard, closed the mills during the Cotton Famine of the 1860s, causing mass unemployment.

By the late 1960s, the mills were mainly producing artificial fibres. In 1979, a management buyout led to the formation of Stanley Mills (Scotland). But the market proved too competitive and the mills closed for good in 1989.

In essence, they are a beautifully restored 18th century cotton mills, some converted into flats and part as a visitor centre. The square based chimney there is the remains of the gas works, that powered the mill until it converted to electricity.

Just go and see for yourself! Buy your tickets online – HERE!